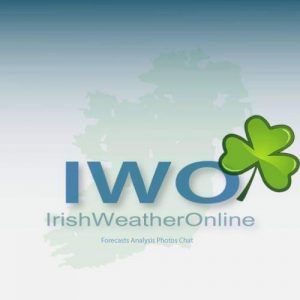 TODAY will be partly cloudy and windy with isolated showers in Munster and south Leinster, where winds may be quite blustery, westerly at about 50 to 80 km/hr, highs 18 to 20 C. Further north, it won’t be as windy until perhaps mid to late afternoon, but much wetter with frequent showers and risk of a thunderstorm, 10 to 30 mm rainfalls possible, with south Connacht and north Leinster into south Ulster getting the heaviest amounts. Highs closer to 16 C in these regions. The western coastal regions will see a rapid shift of winds from westerly to northerly around mid-day with some strong gusts likely, intervals of rain decreasing towards late afternoon and evening there.

TONIGHT will be cloudy with a few showers, moderate but blustery northwest winds and lows near 10 C.

A look at the weekend’s weather

SUNDAY will be partly cloudy with passing showers and cooler than recent days with highs near 17 C.

MONDAY will be mostly cloudy with outbreaks of rain, some thundery and heavy in parts of the south-central counties. Lows near 9 C and highs near 18 C.

TUESDAY will be cloudy in the south with some intervals of light rain, to partly cloudy further north with isolated showers, and highs 18 to 20 C.

What has the weather got in store?

The outlook is somewhat unsettled beyond that with rain likely by about Friday in a changeable westerly pattern. Temperatures will remain fairly close to normal.

My local weather on Friday turned cloudy with a few spots of rain but nothing measurable yet, and some smoke from wildfires about 150 kms to our west. Highs near 23 C.