— Temperatures will average 2 deg below normal.

— Rainfall will amount to 150% to 250% of normal amounts in parts of Munster and Leinster, closer to normal amounts in Connacht and Ulster. A good deal of that will fall in the next two days but further amounts will be recorded most places on following days.

— Sunshine will average half of the normal amount, or about three hours a day on average.

— It will be rather windy for this time of year.

TODAY … Sunny breaks this morning, with some isolated showers, then becoming mostly cloudy, more widespread showers likely before evening when rain will move into the south. Highs 14 to 17 C. Breezy to mid-day then most places having a calmer afternoon.

TONIGHT … Heavy rainfall likely in Munster and Leinster, and a few adjacent portions of Connacht and Ulster, 15-25 mm by morning. Winds increasing to NE 40 to 60 km/hr. Lows 7 to 9 C.

TUESDAY … Rain from early morning spreading through Munster and Leinster, with some heavy amounts especially over higher terrain in southeast. Potential for 35 to 65 mm totals there, otherwise 20 to 50 mm (all of this including amounts predicted overnight above). Not quite as wet in Connacht and Ulster but persistent light rain. Cool with northeast winds 50 to 70 km/hr backing to northerly later. Highs only 12 to 15 C. 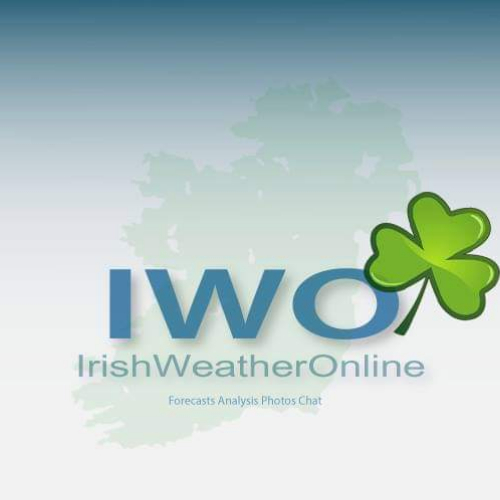 THURSDAY … Isolated heavy showers, risk of a thunderstorm, lows near 7 C and highs near 15 C.

FRIDAY to SUNDAY … Unsettled, highs 15 to 17 C, frequent light rain or showers. Heavier rain appears likely to spread north into Britain at some point during this period and some of it could circulate around low pressure to reach northern counties of Ulster then further south along the west coast eventually, but this scenario could be modified towards a more widespread heavy rainfall if model guidance changes very much over the next few days. As the potential exists for 50-100 mm rainfalls in Britain, we need to monitor the potential in Ireland in case that rainfall shifts over time.

FURTHER OUTLOOK … Somewhat warmer for a time but continuing quite unsettled with frequent rain likely. Unfortunately it may be difficult for anyone counting on a few days of dry weather but we will keep watching to see if a break develops.

My local weather on Sunday was sunny and hot, close to 30 C here and 33 C at a nearby lower elevation airport which was the warmest place in the country at that point.