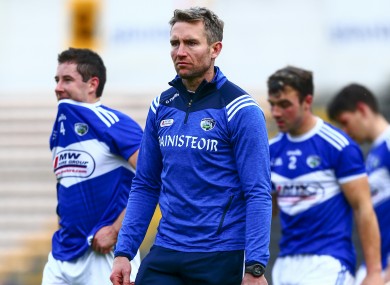 It is clear from the interview the former Laois Manager gave to RTE Radio that the broadcast off-the-record conversation with GAA Hour Podcast presenter Colm Parkinson was definitely not the reason he left the role.

Eddie Brennan made it clear that the reason for his departure was the County Board not being willing or able to support and finance his and his management team’s vision for the future of Laois Hurling.

“There was definitely a difference of opinion in terms of the vision that myself, Niall (Corcoran) and Tommy (Fitzgerald) had for the lads.

“The county board, for whatever reason, wouldn’t support us on that.

“You’re trying to keep moving forward. For the Laoises of this world to make the step up, you need to be resourced, and the level of support has to increase a little bit each year.”

The eight-time All-Ireland-winner from Kilkenny was at pains to put on record the broadcast chat with Parkinson was not the reason. Speaking to RTÉ’s Game On last night, Brennan assured the listeners that the controversy over those off-the-record comments that were broadcast had been immaterial.

“As a stand-alone thing, it happened and we moved on from that,”