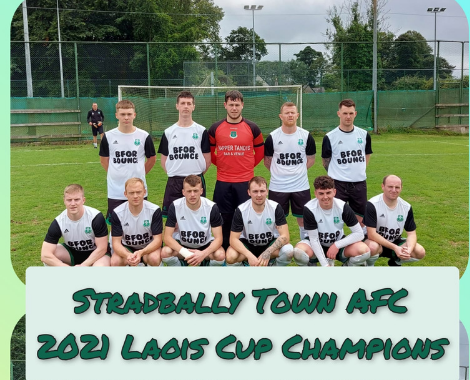 This thrilling encounter was a great advertisement for local Association Football and hints at some great thrills, spills and goals to enjoy in the upcoming 2021/22 league season. On a carpet of a pitch at Fr. Breen Park; home of Abbeyleix Athletic FC, both sides served up a cracking final.

Right from the kick-off the big crowd was treated to a long-range Stradbally Town effort from Justin Lalor that pinged the top of the Mountmellick crossbar. That near miss for Stradbally was soon forgotten when Benny Lawlor broke through on goal and nutmegged Conor Comisky for the game’s opening goal. Realising that the wind at their backs was a potent weapon Stradbally then tried another long range effort. Justin Lalor got on the end of a pass in midfield, looked up and spotted Comisky off his line. Lalor then lofted a superb shot from near the half-way line that spiralled over the backtracking Comisky for Stradbally’s second goal. Two goals inside two minutes and Mountmellick were now struggling against a bright and pacy young Stradbally side. Comisky was then called upon to bat away a Damien Murphy shot as Stradbally threatened to add a third goal.

Mountmellick held out however and were soon celebrating a goal of their own. A diagonal ball from right to left was held up on the wind. Robbie Hibbitts was first to react and he got a toe to the ball at the eighteen-yard line. The nearest defender made contact with Hibbitts who went down. Referee Kevin Bryant didn’t hesitate and pointed at the penalty spot. It was a softish penalty but Shane O’ Connell made no mistake when drilling his spot kick low and hard to Comisky’s left. That Mountmellick joy was very short-lived however. A square pass across midfield was intercepted by Stradbally and when the ball was played across to Justin Lawlor he wanted to try another long-range effort. Looking up the midfield maestro measured his lofted shot to perfection as the lob spiralled over Comisky on the twentieth minute.

Amazingly that restored two-goal lead for Stradbally came close to only lasting ninety seconds. Mountmellick United were awarded another soft-looking penalty but this time O’ Connell blazed his spot kick high over the bar. Mountmellick’s despair soon turned to joy however when they bagged a goal from open play. One of their first neat passing moves of the encounter saw Mountmellick cleverly work the ball from right to left and Shane Dowling was on hand to tap in from close range to cut the deficit to one. Stradbally countered strongly however and their lone striker Benny Lalor was terrorising Mountmellick’s rearguard with his clever movement and searing pace. That speed saw the Stradbally flyer somehow get on the end of a through ball just as Comisky was charging out from his goals. Comisky upended Lalor and after deliberating with his linesman Kevin Bryant flourished a deserved red card at the Mountmellick keeper.

Forced into a massive rejig and a man down Mountmellick United brought on young Rian Coss to go between the sticks. Luke O’ Connor had to make way for Coss who went on to have a fine game. Indeed he was only on the park when forced to punch away the resulting Stradbally free. Despite being a player down Mountmellick began to have some joy down their right flank when attacking. Stradbally were then guilty of giving away a needless free but Mark Dowling blazed it over. The last action of the half saw Shane O’ Connell cut out a Stradbally through ball from Liam Clancy.

A man down yes but Mountmellick United now had the strengthening wind at their backs for the second half. That wind soon powered a series of Mountmellick’s crosses that saw them pepper Stradbally’s defence. The first of those saw Shane Dowling’s header fizz narrowly wide. Then good work from Mark Brennan out on the left saw the tall midfielder play it cleverly across the face of goals and set up an effort on goal. However Comerford was equal to the rasping shot in the Stradbally goals. Stradbally responded when a high Mountmellick boot in a challenge won their side a free. Justin Lawlor took it but Coss was able to push it around the post.

A great Mountmellick move then saw Oran Murphy feed Shane Dowling in space. However his blistering effort on goal was pushed around the post by Comerford. Mountmellick soon had a let off of their own when a Justin Lawlor free kick went all the past everyone and flew just outside the back post. it was an effort that was crying out for a touch. Both sides went close to adding to their tally as the final whistle loomed. In truth however the first half had a near monopoly on the drama. Mountmellick tried manfully in the second period to battle back from a man down. Sadly for them their determination wasn’t rewarded with an equaliser and Stradbally were to be crowned 2021 Laois Cup Champions.

For the winners the electric Benny Lawlor up front and the clever prompting and passing of Damien Murphy in midfield really stood out. For Mountmellick both Shane O’ Connell and Shane Dowling led their team’s fightback well in the second half. However our ‘Player of the Match’ award had to go to 2-goal hero Justin Lalor. His vision and range of passing were a joy to behold.