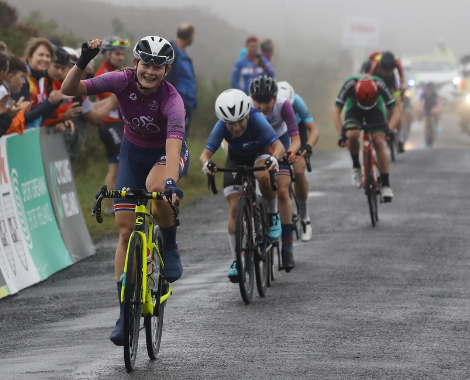 Race leader Abi Smith shrugged off the frustration of two consecutive second place finishes to take victory at the third time of asking at the summit finish on The Cut in County Laois today.

The 19-year-old from Ripon in Yorkshire led in stage one winner Kaia Schmid from Team Lux and her Team GB team mate Anna Shackley at the end of 100km run in misty conditions in the Slieve Bloom Mountains.

Stage two winner Loes Adegeest of Jan Van Arckel was fourth with Alice Sharpe best of the Irish once more with fifth at the line in the same time as the winner. Natalie Grinczer was sixth over the line as a lead group of ten riders fractured in the final uphill charge to the finish line in the longest stage of the race.

That result means Smith retains her leader’s magenta jersey and stays level on time with Shackley, Adegeest and Sharpe ahead of the all-important stage four time trial on Saturday morning.

The final 20km included the twin assaults of The Wolftrap and The Cut mountains which proved decisive in forming a 10-rider group which contested the finish.

The first five riders were credited with the same time as the winner and, with no time binuses on offer, it means the top four on General Classification remain deadlocked on time, only the accumulated countback of finishing positions making it possible to separate them.

The riders left Castlecomer Discovery Park in misty conditions just after midday with a revised route of 100.8km notable for the backloaded nature of the challenge with the final 20% of the stage the most demanding.

Olympic silver medallist and 2019 winner on The Cut, Josie Knight was one of two non-starters as the field of 81 headed into the ‘Queen stage’ with varying degrees of strength and enthusiasm.

After early drags were accounted for, Nikki Alberts from Nord Nolland attacked solo and gained a maximum advantage approaching half a minute. Alberts was brought back into the peloton as the field reached Portlaoise and there was a brief lull in the action as CAMS Basso, LDN-Brother UK and ProNoctis Redchilli Bikes set the tempo in the main pack.

The peloton began to split on the way out of Kinnity approaching the lower slopes of The Wolftrap and as the gradient gripped on the 8.6km climb, a group of 15 riders established an advantage.

Best locally based Irish Linda Kelly of Cycling Munster, who has been focusing on bike racing only since last winter, clung onto the coattails of the lead group for much of the climb, cresting the summit of Wolftrap within 30 seconds of the lead.

She dropped back into the chasing group and finished the day in a fine 20th place, 2m18s behind the winner to retain her Kilkenny CoCounty CouncilCo Best Irish rider leader’s jersey.

Meanwhile up front, Cotter’s selfless work on the front of the lead group helped keep Sharpe sheltered. After a tailwind on Wolftrap which helped split the field, a headwind on The Cut helped keep it together.

Inside the final 500 metres, Smith went to the front and blasted through the mist and fading light to take a well-earned victory which rubber stamped her position in the overall lead.
She continues to lead overall, the Sport Ireland Points competition and the Women’s Commission Young Rider categories and scooped the Just-Print.ie stage winner’s jersey for good measure.

Tomorrow’s double dose of action begins with the stage four short hilly time trial at Tullaroan at 10am. After a At lunchbreak and some rest, the riders will go back racing at 6.30pm in the ever-popular city centre circuit which begins at 6.30pm.

Rás21_3-TheCut_Results by John Hayes on Scribd