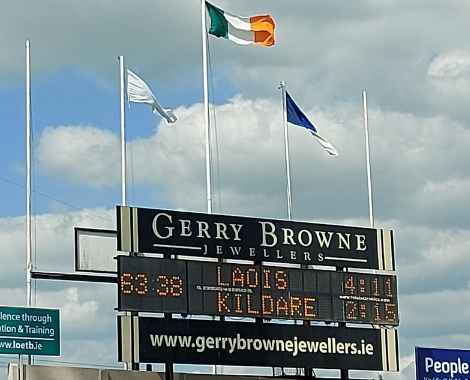 This rivalry between these near neighbours is growing into one for the ages. Kildare must be heartily sick of the sight of the O’ Moore women at this stage. Not only has 2021 seen the Laois ladies triumph in their league group fixture, they went on to beat the ‘Lillywhites’ in the sides’ league final and now this championship setback at the hands of the O’ Moore women will hit them hard.

This rip-roaring contest started with the sides trading points. Aoife Rattigan fired over Kildare’s first point with a fine effort off her right from all of thirty yards out. Mo Nerney quickly rubbed out Kildare’s advantage with a pointed free after the referee’s astute use of the advantage rule. Indeed the ref is to be praised as he let the game flow throughout with good use of the new advantage ruling. Kildare soon countered and Neasa Dooley ended a flowing move by sweeping her shot over the bar. Laois came back at the ‘Lillies’ and when the razor-sharp Erone Fitzpatrick missed narrowly to the right of the sticks ref called the ball back for a Laois free. Mo Nerney nonchalantly stroked over the free from out her hands.

in attack Kildare were now getting out ahead of the markers. None more so than Dooley who soon won her side a free which Gilbert converted. Laois’ response saw Sara Ann Fitzgerald break through but Kildare somehow kept the Portlaoise forward out. This enthralling end to end contest then saw Kildare work a clever overlap from which Ciara Wheeler angled over a point. The response from Laois saw two bad misses notched up in quick succession. Crucially though Jane Moore was bombing forward more and more and stressing an overworked Kildare defence. That Laois pressure soon resulted in corner forward Fitzgerald’s mishit shot spin over Maginn in the Kildare goals for the game’s opening goal. Kildare roared down the field and were soon celebrating an equalising point from the left boot of Dooley.

Laois now had more of a goal threat however and a second goal was on only for Moore’s hand pass was slightly overhit to the lurking Mo Nerney. Kildare’s response saw Curran push her free wide. That miss was soon to haunt Kildare as Laois broke forward and registered a marvellous team goal with Mo ‘The Show’ Nerney firing low into the bottom right-hand corner. The final score before the water break saw Fiona Dooley (see video below) fire over a well-taken point to leave Laois in a 2-03 to 0-05 lead at the break.

The second quarter saw Kildare draw first blood when Curran tapped over her free. Given the searing temperatures Laois adopted a ‘slow, slow, fast’ tempo where they’d cluster in the half-back line then keep ball before unleashing a measured attack. Laura Nerney was the orchestrator of those choreographed attacks. The next measured attack saw Jane Moore fouled and up stepped Mo Nerney to angle her free over the bar. Kildare counter-attacked, but despite good defending from Amy Potts, Kildare were awarded a free which Curran duly converted.

Laois were getting on top however and their next raid forward saw Erone Fitzpatrick expertly link up with Mo Nerney and the Timahoe ace duly delivered another point from play. Mo then followed up with a pointed free via the post. Kildare needed to push up on Laois as the O’ Moore women were now in the ascendancy. Fiona Dooley and Laura Nerney were timing their runs forward to perfection and bringing others into play. indeed it was Laura Nerney’s next foray forward that saw the former Portlaoise ace link up with Potts and Anna Healy before Erone Fitzpatrick got on the ball. The Park-Ratheniska player went on to angle over her shot from an acute angle. It was a splendid score and just desserts for her lively showing on the day she celebrated her 21st birthday. With almost their last kick of the opening half Gillian Wheeler could only look on in dismay as her goal-bound shot smacked off the post. That let off saw Laois troops off to the cool and sanctuary of the dressing room on a 2-07 to 0-08 lead at the break.

Amazingly Kildare came out and bossed the third quarter. Funnily enough Laois landed the first score of the second half. The home side worked the overlap well and when Fiona Dooley switched the ball across to Sara Ann Fitzgerald the Portlaoise forward took her goal well. Kildare’s reply was almost immediate. A great break saw Clifford shoot for goal. Barry was equal to the shot but to the anguish of Shanahoe goalie Gillian Wheeler was on hand to fire the rebound into the net.

Kildare’s momentum continued with the awarding of a soft free that Curran fired high and true to add to her tally from placed balls. The ‘Lillywhites’ were now pushing up on the Laois kick outs to good effect. That pressure soon told and Gillian Wheeler took full advantage to fire over a fine point from play. The visitors were then awarded a penalty that Gillian despatched to Barry’s right for Kildare’s second goal. Another fine point from play for Kildare soon followed. Laois were, by now, reeling. Gillian Wheeler then got on the end of a ball forward and fisted over the bar to stretch Kildare’s advantage. The introduction of Nanci Murphy added to Kildare’s dominance and the sub soon got on the scoresheet. The two Wheelers tacked on more points as there seemed no way back for Laois. The O’ Moore women trailed by Kildare on a scoreline of 2-14 to 3-07 at the water break.

Amazingly Laois turned the match completely around in the final quarter. Leah Tarpey tapped over a fine point but there had been a goal on for the taking. Tarpey and fellow introduced sub Alannah Havill made their mark quickly. Soon Laois were celebrating a fourth goal. Good work upfield ended up with Mo Nerney being upended in the square. The Timahoe ace dusted herself off and fired low to Mcginn’s left to hit the net. Mo soon followed up with another point as Laois were doing all the running. Clifford scored a nice point at the other end but it did little to stop the Laois momentum. In response Fitzpatrick treaded a lay off to a team-mate that ended in another point. Another converted Mo Nerney free from a very tight angle piled even more pressure on Kildare.

Any Kildare raids forward were now being dealt with by a strong Laura Nerney-led defence. Indeed Laura Nerney seemed to sense where the danger was coming from and snuff it out. Increasingly desperate, as the match entered the dying seconds, Kildare tried for a goal from a free but Laois players got their bodies in the way and hold on for another comeback victory for Laois against their old rivals from up the M7.

Barry Redmond added so much to the free-flowing nature of the match. His use of the new advantage rule, especially in the first half, was great.