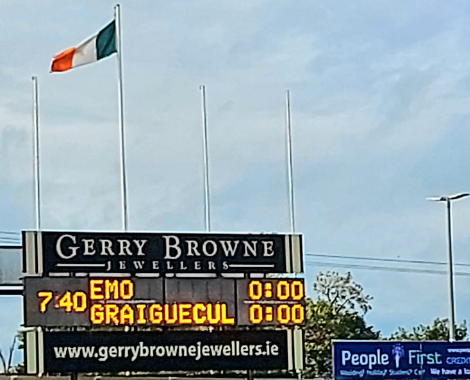 Graiguecullen’s cutting edge too much for Emo

On a windy, rainy night in O’ Moore Park Graiguecullen eased themselves into their first Laois Senior Final since 2011. Emo can have no complaints. Apart from a flurry of goals after the first water break their attack was toothless In contrast Graiguecullen, powered on by a strengthening wind, completely dominated the opening quarter and held a six-point lead at the first water break. From placed balls Brian Byrne was reliable. Any free that was outside Bryne’s range big Danny Bolger came up from his goals to rocket over. The Carlow-border outfit also tacked on scores from open play with Shane O’ Neill and Chris O’ Neill lighting up the scoreboard. The highlight of the half saw a mighty mark won by Ross Hennessy. He spun his shot over bar from out on the left wing. in contrast Emo’s only score of that opening quarter came courtesy of Nigel Murphy.

All was to change immediately after the resumption of play. A brace of Emo goals courtesy of Sean Greene and then Darren Strong dragged their side back into the contest. Graiguecullen’s response to each Emo’ green flag’ was a point each time. Then Graiguecullen struck for a goal of their own. A great piece of interplay was finished to the net by Mark Timmons who had kept his run going from way back in defence.

Emo, with the strong wind at their backs, looked all set to get back into the contest in the second half. However their rally never materialised. In fact Graiguecullen played well into the test of a strengthening wind. On occasion the Carlow-border side kept ball, moving Emo out of position before striking for those crucial scores that kept their four-point buffer intact right up to the final whistle.

For Graiguecullen a county final awaits them next weekend. They will face the winners of the other semi-final. On this showing though they will fancy their chances against either Portarlington or Ballyfin.