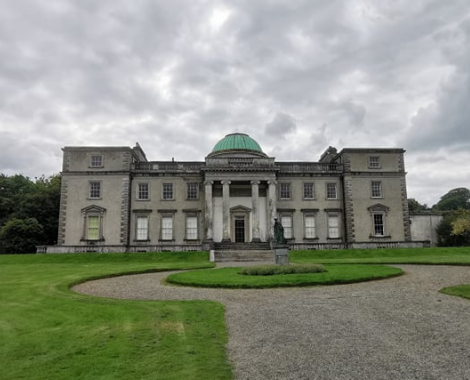 OPW to carry out survey of Emo Court’s Lake

Just before the Christmas break Sean Fleming T.D., Minister of State at the Department of Finance was pleased to give the following progress report on works currently underway and improvement plans for Emo Court.

“I have a keen interest in Emo Court and I have been in ongoing discussions with the Office of Public Works regarding a number of issues at Emo Court.”

The main works at Emo Court consist of the refurbishment of the main building, the provision of a new car park, a decision on the future use of the cottages at Emo Court and the investigation into the dropping water levels in Emo Court’s lake.

“Substantial improvement works are currently being undertaken by the OPW which includes refurbishment of the first floor, ground floor and basement of the House involving an investment of approximately €2 million.”

“€570,000 is currently being invested in the provision of a new car park which is due to open in April 2022. There will be 173 car spaces, 8 universal access parking spaces, 8 electrical vehicle parking spaces and 4 bus parking spaces. The surface will be a stone chip finish. This will be a major improvement to the amenities for everybody who visits Emo Court.”

“The lake at Emo Court is man-made and is not a natural lake. This lake is supplied by a spring located approximately 4 miles away. When there is a blockage in the water course between the spring and the lake, the water levels in the lake drops significantly. This results in the lake disappearing on occasions. Many people who visit this location often remark that the amount of vegetation on the bed of the lake is taking over the lake when in fact the problem is the water levels in the lake are dropping and thereby exposing the vegetation on the lake bed.

The OPW will carry out a survey on the water course to investigate for signs of blockage or the water supply being syphoned off to other locations. Currently the water levels in the lake are being supplemented from a local well in Emo Court.”

“The long term plans for the unoccupied cottages in Emo Court will be of for them to be used specifically for artist residencies to support cultural programming at Emo Court. In the meantime these unoccupied properties are being used for storage of items and artefacts from the main house while work is ongoing in that building. Currently the 2 cottages and the gamekeepers cottage are being heated to preserve the buildings and have security and fire alarms and their condition is being continually monitored.”

“All in all, this represents a substantial level of current investment and future plans by the Government for Emo Court which is so important from a historical , community and tourism potential point of view.”