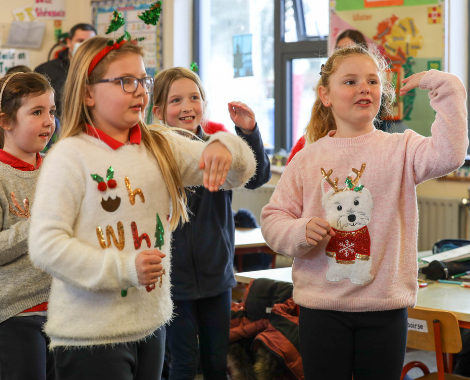 Musical Memories was established in 2020 to bring together young people and older people from national schools and care homes in the county to combat social isolation during Covid lockdowns. The project has gone from strength to strength and in 2021 expanded into Mens Sheds and integrated a ukuele playing programme.

“It was a joy for me to return to County Laois and take part in a number of musical events in schools and Mens Sheds as part of Musical Memories. It’s been five years since I waas involved in the Laois 1916 centenary celebrations and composed my song  for Laois ‘100 Snow White Horses’ which went on to be the title track of my new album. It is lovely for me as a travelling musician to renew these bonds of friendship and make new friends among these open, friendly and musical communities. It was so nice to visit Paddock NS, Rath NS and the Mens Sheds in Mountmellick and Portlaoise”.

At times due to restrictions in 2020 and 2021, Musical Memories was delivered online by lead musician Nuala Kelly, who works with the Music Generation Laois Primary Schools Programme. The project initially engaged with children and staff of Paddock NS and residents of care settings in Laois – Abbeyleix Hospital, St. Brigid’s Hospital, Shaen and St. Vincent’s Mountmellick Community Nursing Unit. In early 2021, it expanded to include Mountmellick Men’s Shed; Rath NS and Errill NS. During the summer outdoor musical events took place in care settings facilitated by Music Generation Laois musicians Nuala Kelly and James O’Connor. Members of Portlaoise Men’s Shed and their grandchildren as well as grandparents of children in Paddock NS and Rath NS began their musical engagement later in 2021.

“We have had the pleasure of musician John Spillane singing with Musical Memories participants at Paddock NS, Rath NS and the Mens Sheds in Mountmellick and Portlaoise as part of our live Christmas celebrations. John has visited Music Generation Laois many times pre-Covid. It is with much enthusiasm we welcomed John to participate in our Musical Memories project and in particular to hear him sing ‘100 Snow White Horses’ a song John wrote for County Laois and the title of his brillant new album”.