As Chairperson, speaking on behalf of the Laois Offaly Social Democrats, it gives me great pleasure to notify you of some recent developments within our parties organisation on a local level here in Laois Offaly. Our local branch, which has been in existence for two years, has recently gained full accreditation as an officially recognised branch of the Social Democrats by the national governing party. Gaining official accreditation is a significant step in the overall expansion and development of the party and its structure here in Laois Offaly. This recognition comes on the back of immense work by our existing party members, our current county councillor for the Birr local electoral area Cllr Clare Claffey, and on account of the foundations for our present success which were built by our outgoing Chairperson Ann O’Connor.

Also, over the past number of weeks our members have been busy researching and creating amendments which we have subsequently submitted as part of the public consultation process on the Draft County Development Plan, with the proposed plan running between 2021-2027. Our amendments have also taken into account suggestions which we received as part of our previous party initiative An Offaly Good Idea, whereby members of the public were asked to submit an idea which they felt would significantly improve the quality of life in their county. As a party and as a wider community we are now eagerly awaiting the councils review of the public consultation process and we very much look forward to seeing some of our members’ suggestions included in the final plan to be published in 2021. 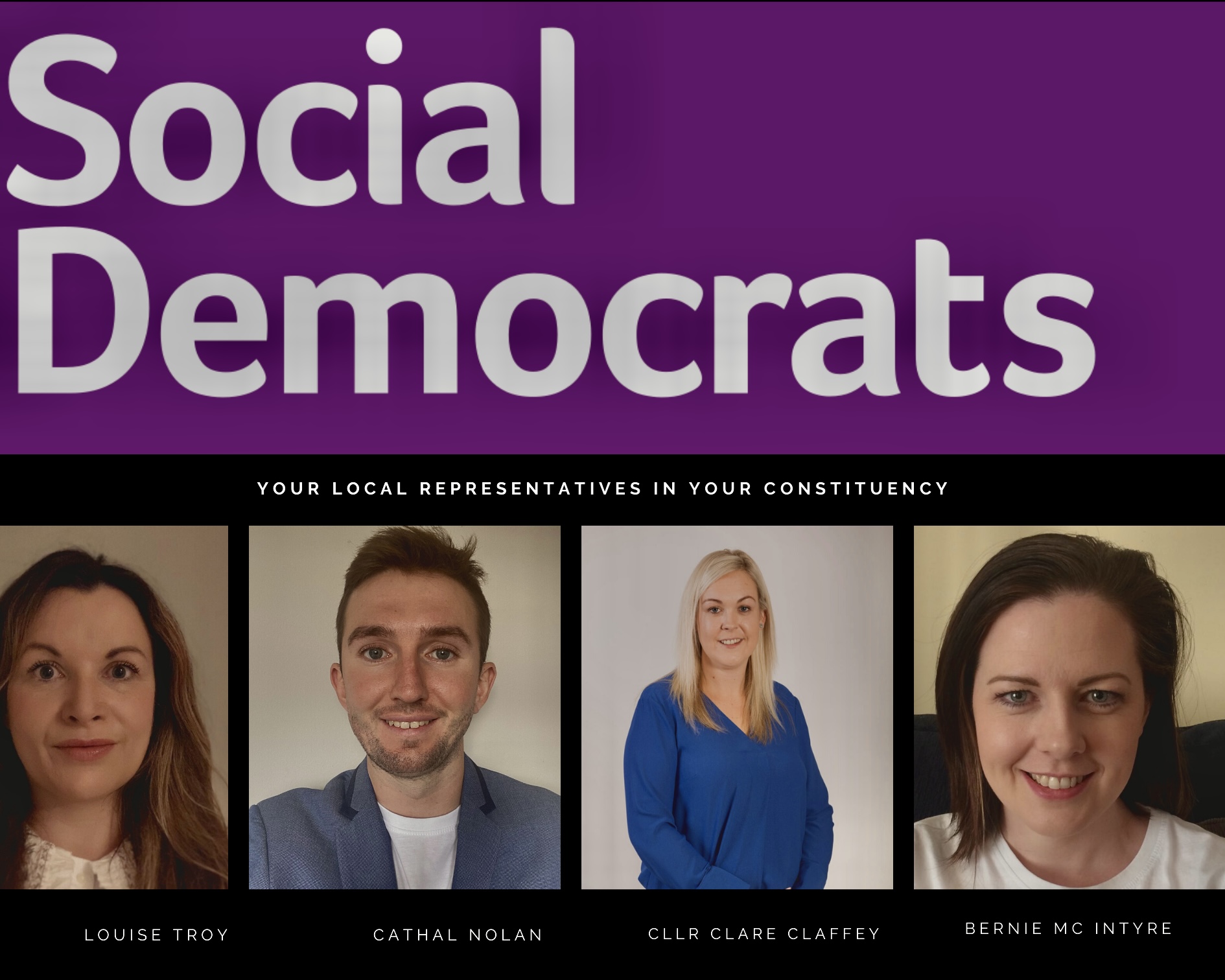 Our party is one which has developed a genuine vision for the future of Ireland, and for the future of the constituency of Laois Offaly. Ours is a party which seeks to harbour and encourage the benefits of a truly just transition towards a more sustainable society, as presently we have only encountered a rather unjust transition which has done very little to improve the fortunes of our constituents and their families. Through the immediate reskilling of workers whose jobs are under threat, generous pension bridging packages, innovative uses for cutaway bogs, and through the establishment of community power projects which deliver cheaper, cleaner energy and home heating services to the people of Laois Offaly we will endeavour to bring the fruits of an energy revolution into each and every home across our constituency. We must embrace such a transition and ensure that we take the necessary steps in protecting our most vulnerable, who-m, through a lack of vision on the behalf of successive governments, have become exposed to the risks of an overly rapid transition towards a low carbon economy. At present there exists a certain degree of exploitation whereby our most natural of resources, a restless wind, the soil beneath our very feet, and, on occasion, the power of our sun, are being utilised by the forces of man, but by a few men, for the prosperity of even fewer. As a party we wish to create a more just, shared and equitable division of the benefits of a necessary just transition process with community driven projects increasing local employment, ensuring local constituents retain a majority share in the project and that income generated from the resale of electricity benefits the community directly.

We believe in the creation of a fully connected and reliable public transport system, one which caters to the needs of all in Laois Offaly, and especially for those whom-who are forced to commute some of the longest distances of any workers in the country, often departing in the cold darkness of a winter’s morning only to return exhausted and weary in the equally crisp chill of a winter’s evening. The average commuter in Laois Offaly, of which the numbers exceed some 25’000, spends an average of 27 days per year commuting to and from their work destination, with that figure failing to allow for traffic disruption which indicates that the yearly total is arguably much higher than 27. By ensuring that all localities within Laois Offaly are connected with high speed broadband, or remote working hubs are further established, combined with a vastly improved public transport system, we wish to reclaim some of those lost hours which would be better served in the company of our nearest and dearest. Alternative transport solutions such as greater access to rural transport services on a community basis, as well as the development of community carpooling technologies which reward drivers and users of such a service while excess funds are directed back towards a community fund to be reinvested into the Laois Offaly constituency for further local growth and development.

The backbone of the economy of Laois Offaly however are the thousands of small and medium sized enterprises which can be found throughout every town, village and shrah across both counties. However, in the present climate whereby uncertainty and economic decline are widespread throughout our national economy, many of our small to medium enterprises face increasing financial constraints, with thousands of businesses expected to close, with some closing their doors for good, as a result of the current national health emergency. One area which we as a party wish to help alleviate is ensuring that community banking services, which could be provided by a combination of An Post or local Credit Unions, who instead of grossly overcharging SME’s with some of the highest interest rates in the Eurozone, would be able to provide affordable financing which ensures a more equitable relationship between community banks and local businesses. Currently Irish SME’s pay an average of 5.03% interest on loans of over €250’000, compared with a Eurozone average of just 1.90%. Meanwhile, large corporate businesses in Ireland pay just 2.39% interest on loans of over €1 million. This practice combined with the development of a communal shared e-commerce platform would allow for all businesses to share their products and advertise online, with a remote delivery service option also being considered further allowing for growth in the local economy. Finally, as has been successfully implemented in various other economically disadvantaged regions across Europe, the establishment of a community currency or complimentary currency which allows for SME’s to trade successfully within the community during the times of cash or liquidity shortages should also be pursued in the context of Laois Offaly, and possibly through the wider Midlands.

Such affordable financing options would not be limited to businesses, but would also be extended to the private sector, so as to afford first time buyers and those seeking to build their own home mortgage rates far below that which are currently on offer within the state. Recent figures published in the Irish Times by Brokers Ireland alluded to the fact that currently Irish citizens with a mortgage to the value of €300’000 are paying an average of €80’000 more than the Eurozone average. At a rate of 2.98% the average Irish home owner will end up paying €454’000 on a mortgage to the value of €300’000, compared with the repayment of just €374’000 for a comparable mortgage on the near continent. Meanwhile there are over 2’300 people currently on social housing waiting lists in the Laois Offaly constituency, with these figures expected to grow significantly over the coming years due to a combination of policy and societal failings, with government figures indicating that just 9%, 725 houses, of the intended housing stock of 7’736 have been built in the first two quarters of 2020. As a comparatively small wealthy nation the fact that we have over 9’000 homeless people on our streets, with this figure having increased by 242% since 2014, is simply unacceptable. Yet these figures hide the true numbers of those living in emergency accommodation, couch surfing, living in overcrowded, unhealthy and unsuitable accommodation in every town and city across the state. As a party we wish to bring legislation which can end homelessnes in Ireland such as the prioritisation of local land for immediate state owned housing developments, developing a new housing delivery agency, reduce building costs, plus a combination of rent caps and adequate rent regulation. Over the course of the coming months, the Laois Offaly Social Democrats will outline further policies and offer our stance on other serious issues within the community such as homelessness, Ireland’s ailing health service, education and social isolation amongst the elderly, the lack of local disability, mental, youth and domestic violence services within the constituency.

In the meantime I am thrilled to announce that we will be expanding throughout the constituency, with local representatives from the party being established as a point of contact within each of the local electoral areas. Our local rep for the Birr community electoral area will be our current county councillor Clare Claffey, with Bernie Mc Intyre, our current party secretary for Laois Offaly, being our person on the ground in the Tullamore local electoral area. I myself, Cathal Nolan, will be responsible for developing the party and serving as a point of contact in the Edenderry and north Offaly local electoral area, while at the present moment our sole Laois party affiliate will be Louise Troy, a well known personality and local of Portlaoise. If there are any issues which you would like to see raised with the county council, or brought to the attention of our parties six TD’s, or if you simply require some assistance with forms, housing related issues, advice on council services or if you are in need of direction then always feel free to reach out to our various representatives across the constituency of Laois Offaly, or get in touch through our Facebook and Twitter feeds. Ultimately, if you feel like joining a party which has set a course to become community leaders, actively working towards developing a truly just society built on the foundations of equality, truthfulness and selflessness then we would ask you to consider becoming a member of the Laois Offaly Social Democrats. Sometimes life can prove to be rather difficult, especially so in the current health and economic climate. However, we can assure you that, together through greater cooperation and unity on a local level, that our shared future will be better for all in the constituency of Laois Offaly.

We look forward to welcoming you on this journey.