Laois musician Senan Moran will be amongst the competitors taking to the stage in the final for the Seán Ó Riada Gold Medal fiddle competition in the Rochestown Park Hotel in Cork on Friday 1 February.  The final will be broadcast live on RTÉ Raidió na Gaeltachta.

Senan is 18 and is from Dysart, Stradbally, Co. Laois.  He is currently in his final year of the Leaving Cert cycle in Mountrath Community School.  Senan is a multi-instrumentalist, and has achieved acclaim in both classical and Irish traditional music.  He has been playing violin since he was four years of age, and dearly loves it.  In 2017, he won the senior violin competition at the Sligo Feis Ceoil and later that day, he won the RTÉ Lyric FM Senior Instrumental Bursary competition of €1000.  In April 2018, he won the senior violin competition for a second year performing ‘Sibelius Violin Concerto’. 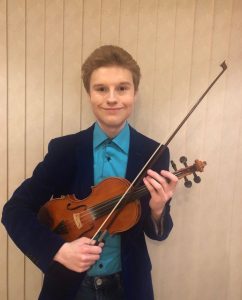 There will be seventeen fiddlers in total competing in the final for the prestigious Seán Ó Riada Gold Medal, with the winner taking home €2500 as well as the coveted medal, designed by the late Cashel Goldsmith Pádraig Mac Mathúna.

The final will be broadcast live on RTÉ Raidió na Gaeltacht on Friday 1 February from 7 pm, and will also be streamed live to the RnaG Facebook page.