Laois was represented at a major international conference held recently in Clifden to mark the centenary of the first non-stop transatlantic airplane flight by Alcock and Brown in June 1919.

Teddy Fennelly, a lifelong aeronautics enthusiast, was introduced at the conference by Laois Heritage Officer Catherine Casey. Currently President of Laois Heritage Society and Chairman of the Laois Heritage Forum, Teddy has written numerous books, mainly historical and biographical, including the biography of Ireland’s most famous aviator, Col James Fitzmaurice, titled “Fitz and the Famous Flight”, published in 1998. He spoke about the life and achievements of Col Fitzmaurice, a Portlaoise native, as co-pilot of the first nonstop transatlantic plane flight from Europe to North America, in April 1928. 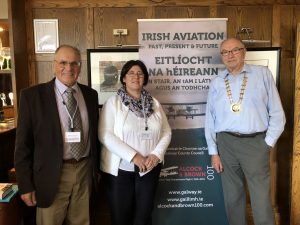 Those present were also fascinated to hear about the “Portlaoise Plane”, built by Louis & Frank Aldritt, Motor Engineers was the first plane built and flown in what is now the Republic of Ireland.

It is known that Aldritt’s had a patent to build an airplane as early as 1907. It is also on record that the Portlaoise Plane succeeded in covering a short distance in November, 1909.

Teddy Fennelly said “We know that Colonel James Fitzmaurice helped in its construction as a young boy, and it’s quite likely that this is where the seed was sown for his life-long passion for Aviation. The airplane remained in storage in the original Aldritt motor works at Bank Place, Portlaoise until the late 1970s. It was acquired by a private collector who transported the plane to his premises in the South of England, until we recently brought it home to Ireland. You can follow the story of the Portlaoise Plane at portlaoiseplane.com” 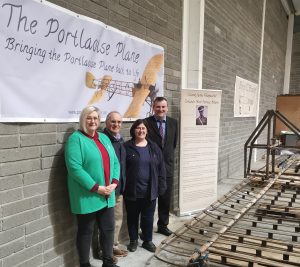 Another highlight of the conference was the display of model aircraft brought to Clifden by Laois and Midland Model Aero Clubs members Michael McEvoy, Mel Broad, Heather Broad and Martin Sweeney. The aircraft were on display in the Museum in Clifden for the duration of the commemoration events.

Michael McEvoy said “The Model Aeronautics Council of Ireland (MACI) was formed in 1939 by a group of model aircraft enthusiasts when model aircraft technology was in its infancy. Today, 80 years later, almost 6,000 enthusiasts have passed through MACI, many carrying their interests to a life in aeronautics, designing, maintaining and piloting a range of aircraft from a Cessna 150 to a 747 Jumbo Jet while others have taken the road to military aeronautics. The Laois Model Aero Club is one of 29 clubs nationwide with almost 500 members. The MACI website www.maci covers all aspects relating to model aircraft and the many different types now available to the modelling enthusiast from a simple electric to a sophisticated turbine model”. 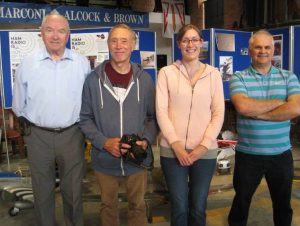 Michael McEvoy, Mel Broad, Heather Broad and Martin Sweeney of the Laois and Midlands Model Aero Clubs at the “Irish Aviation – Past, Present and Future” conference in Clifden.

Catherine Casey, Heritage Officer with Laois County Council, said “with so many strands to the story, the history and the future of aviation in Ireland are firmly centred on County Laois. We look forward to working closely with MACI and Laois Heritage Society as we start to plan for the centenary of the first East West transatlantic flight, in 2028.