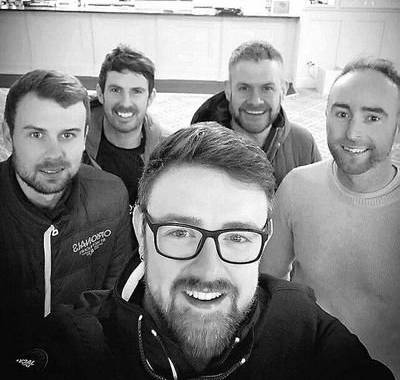 Local band ‘Drops of Green’ are absolutely delighted to announce that their single “On The Carousel” has won the Best Music Video award at the ALSR Celtic Music Awards last night. They would like to thank David Dooley and John Cleary from Bearfoot for producing an amazing video for us, also a huge thanks to Brendan Corcoran for his incredible performance and Martin Quinn at JAM Studios. The song was written by their own Robbie Campion and good friend Davey Long. It’s hard to believe that it’s been a year since they released it back in January 2020 right after their performances at Temple Bar TradFest and then going onto reach No1 in the Irish Download Charts a few weeks later was huge for the band. So the band want to thank everyone who downloaded it and made that possible.

Drops Of Green are an Irish band of five talented musicians and singers. Rooted in the folk and traditional movement, this band have a uniquely accessible sound and a live energy that is unparalleled. ‘On The Carousel’ is the first single from their forthcoming 2020 studio album. Written by Davey Long & Robbie Campion, the song deals with love, loss, family and perhaps most poignantly: hope. Produced by Martin Quinn with additional strings by Rob Larkin, ‘On The Carousel’ is positive proof of this group’s dynamism.
The accompanying video was produced by Bearfoot Productions and features the talented thespian Brendan Corcoran in his debut music video performance.