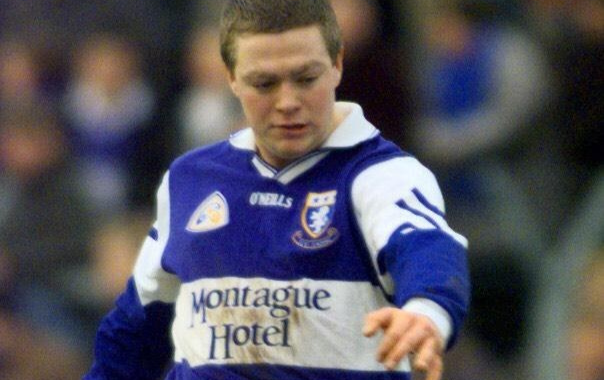 Chris Conway grew up in the small parish of Arles, which is located close to the Carlow border. Much like any kid, he aspired to play inter-county football and is a man who has had his fair share of difficulties along the way. Conway has won various club and county honours. He was part of the 1996 Laois minor team that got the better of a fancied Kerry team in the All-Ireland final. He won a Leinster Senior Football winner’s medal in 2003, but unfortunately missed the team’s victory over Kildare after a groin tear. He also has a Laois senior football county medal from 2003, won with his club Arles- Kilcruise.

So how did Chris get involved with GAA in the first place?

“I grew up watching the great Portlaoise team. They played in the provincial club championship, which was quite different from local games. They had some amazing players. My father JJ and my uncle John were a part of the 1968 team that reached the Leinster final. I suppose there was always a ball around the house and I just wanted to be like them. That’s why I chose football in the beginning.”

Being the club man Conway is, it’s fair to say it helped him find the drive to succeed at the highest level. Does anything stick out in his mind in particular, playing underage?

“Yes, one time we were playing in an u10 tournament and I’ll never forget it. Our goalkeeper at the time kicked the ball over our bar, he smiles. It’s those moments you carry with you.”

Conway had an education into football during his Knockbeg college days and this brought him into the Laois minor set up. What was playing underage for Laois like?

“Well in 1996 we had a great team and the talent was there. We went on to win the 1996 All- Ireland against Kerry, which was a fantastic achievement for us, and we were determined to carry that on further. Beano and I were a part of that team and played U-21 level together. Unfortunately, we were beaten in an U-21 final, but it was evident that our potential and talent was there.”

Conway was known for being a hard worker both on and off the ball. It was a hallmark of the great Laois teams that he was a part of. Where was this art learnt?

“Locally, I would have watched my uncle John and how he played the game, on a national level, I looked up to Barney Rock of Dublin. He had everything.”

Chris can still remember the day he got the call to train with the Laois senior squad like it was yesterday.

Winning Leinster for the first time since 1946, in 2003 was huge for the people of Laois and under the guidance of Kerry native Mick O’ Dwyer, the famine finally ended. What was Micko like to be around?

“We were always wishing and hoping he would walk into our dressing room one day. His success speaks for itself. He used similar methods to the great Manchester United team, during their success and he got us a lot fitter. His training methods were second to none and the man oozed class. He gave us the belief that we could succeed. We had the belief and momentum and that was down to him 100 per cent.”

Being from such a small county as Laois, club rivalries were stronger than a lot of other counties. However, Conway doesn’t believe that it ever affected the county set-up.

“No, I can’t say that it ever did. We had a respected rivalry at club level, but we were all there for the same purpose and that was doing the best we could for Laois.”

Being such an instrumental part of the Laois half-forward line was something which Conway was well accustomed to. What was his key strength?

“I suppose my main role in the team was competing. My physicality and work- rate on the ball, was something I enjoyed. I used to love coming up against Kieran McGeeney of Armagh. We loved a good battle and lived for the physical stuff. He was my toughest opponent over the years.”

Conway missed out on the 2003 championship through injury and, despite winning a Leinster medal, believes Laois should have won more.

“One regret that group has is that we didn’t get to play in an All- Ireland final. We had experienced it together at minor and u21 level and believed we were capable of doing it at senior. We also would have loved a bit longer with Micko. We had 4 great years with him but would have loved more time with him for sure.”

The game of Gaelic football has changed a lot in the last 10 years. Tactics are far beyond what they once were.

“I completely agree, remarks Conway. You only have to look back to when I had just finished playing in 2008 and the likes of Tyrone brought in a defensive system, which Jim McGuinness developed further with Donegal. In fairness, it was successful for Donegal. They won an Ulster championship and then an All- Ireland, in the space of 2 years. However, players are fearful of taking risks nowadays. They are working in a system and don’t want to lose possession. Kicking is something that has been diminishing in our game. It’s a shame. I would add that Kerry’s success years ago was down to a slick kicking game and would suggest they need that back, to win All- Irelands again.”

Although the game itself has changed since Conway hung up the Laois jersey, the friendships that he has made over the years have remained.

“Oh yes. I remain amazing friends with the likes of Ross Munnelly, Beano Mcdonald and Billy Sheehan. We would still talk regularly. That friendship has remained and will continue to do so.”

Having had many coaches over the years, Conway believes being able to play off both feet was the best advice he was given.

“The best advice a 100 per cent. It makes you harder to mark playing off both feet and it also improves movement and balance which is very important, particularly as a forward. It kept defenders guessing for sure and removed that element of predictability.”

Ex-Laois player Chris Conway appearing with former Dublin star Paddy Christie,and former Westmeath forward Denis Glennon and they look back on the days before all-conquering Dublin in the late ’90’s and early 2000’s in the Leinster Senior Football Championship.

Conway also looks at players who he believes could do a great job for Laois.

“If there was a transfer market, I would get Brian Howard of Dublin. He is very versatile. He can play anywhere across the middle sector and I would even have him playing in the fullback line.”

Today Conway enjoys coaching and has led Knockbeg to huge success, winning an All- Ireland schools final in 2005. He has put his experience in playing the game and it has helped his coaching methods. What lead to this success in the school?

“I suppose lads bought into our ideas and worked hard. Like anything, hard work and belief go a long way. Players would have come from counties like Laois, Kildare and Carlow and this improved the quality of players we had at the school.”

It has been argued from many quarters of the media that the gap between Dublin and the rest is getting considerably bigger, having won their 6th All-Ireland in a row. Conway believes more can be done to get Laois back competing with the likes of Kerry and Dublin.

“I believe for Laois to be able to compete we need to step on that mountain, before trying to knock the dubs off it. Perhaps a championship before league campaign. It might get Laois a run of winnable games, which may give them momentum. I think 4 teams from division one, 2 from division 2, 1 each from division 3 and 4 could make up the quarter-finals. That way the weaker teams could have a cut at the big guns. Proper coaching in Laois at school’s level would help and get these players playing and exposed to a higher level. We have the pieces of the jigsaw here. The centre of excellence beside O’ Moore Park is a great facility and I can see improvements in the future. You have to believe that Dublin are coming down off that mountain.”

Conway has been retired from inter-county duties since 2008 and now spends his time with his family and puts his passion into coaching. Has he ever tried any other sports?

“Yes, I tried my hand at Hurling. We weren’t very good. We didn’t train as a team. I stuck with the club after I left Laois. We won a Laois championship. I also got involved with Kilruane MacDonagh’s in Tipperary and coached them for a few years and we had a fair bit of success. I am just focused on my job as a teacher and coach in Knockbeg now and obviously, my family is something that is my primary focus.”

It is fair to say that Chris Conway has been a loyal and fantastic servant to Laois over the years and who’s to say that he won’t be involved as a manager with Laois in the not too distant future. You wouldn’t bet against it.