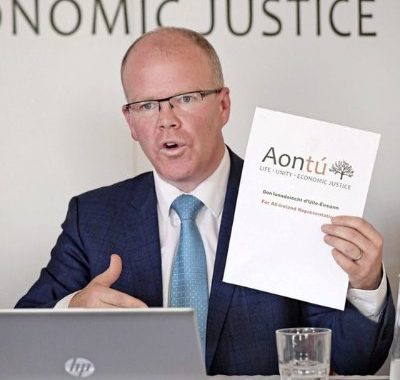 Ms. Doogue said “In a shameful tactic, Minister of State Sean Fleming, Charlie Flanagan, and Barry Cowen chose not to recognise the valuable contribution of student nurses and midwives by voting against a motion to ensure an end to the exploitive conditions that students nurses have to endure while propping up an already dysfunctional health system”.

Aontú Cllr for Cavan & Cathaoirleach of Cavan County Council Sarah O’Reilly @sarahreilly30 telling the government to #PayStudentNurses after using them as Cannon fodder on the frontlines & to plug holes in the health system in the fight against Covid #PayStudentNursesandMidwives pic.twitter.com/6H1WNFDVpl

“ As Parliamentary Assistant to the Aontú Leader, Deputy Peadar Tóibín, who voted in favour of the motion, we have been contacted by several student nurses during the course of the past few days  and after the vote providing their personal testimonies of the 1500 hours or more they have to work unpaid during their placement”.

“They describe themselves as free labour having to fill the gaps in situations of staff shortages and most notably the many personal sacrifices they have had to make during the COVID pandemic. The Green Party which proclaims to espouse the values of social and economic justice also chose to disregard the contribution student nurses and midwives make within the health services. Aontú will continue to campaign to ensure the government do the right by student nurses who have put the health of the country above their own welfare”. Ms. Doogue concluded.