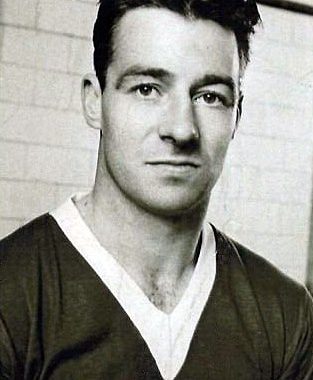 Tommy Ring was born in Glasgow (son of Patrick Ring of Tunduff, Abbeyleix, an uncle to the late Paddy and John Ring and Andy who at 87 years old still resides in Abbeyleix). Tommy spent many happy summers holidaying in Tunduff and always kept in touch with close family relatives. Coincidentally Tommy’s uncle Charlie Ring worked at Hunt’s Factory in Scotland where they made leather soccer balls.There is a tale that Tommy, on one of his many visits to Abbeyleix, played Junior Gaelic Football with Abbeyleix!

Tommy was best known when he played for Clyde, who won the Scottish Cup in 1955 and 1958.  He scored the winning goal in the replay against Celtic. He was capped 12 times by Scotland (53-57). He played for Ashfield, Clyde, Everton, Barnsley, Aberdeen, Fraserburgh, Stevenage Town and the Scotland National Football Team.

Ring was transferred to Everton in 1960 for £12,000. He spent only a short time with Everton, but the impression he made was deep and lasting. From the first moments of his debut against Nottingham Forest in January 1960, it was evident to all connoisseurs of quality football – and there has never been a shortage of those at Goodison Park  – that a performer of pure quality was parading his wares. Ring is still considered one of their best players hence many headlines were written concerning him such as “Blues could just ‘Ring” for service”, etc.

The Scottish International left-winger, then approaching 30, had been signed cheaply from Clyde in an attempt to add much-needed inspiration to a side that was hovering dangerously near the relegation zone. Some said he was past his prime – and they were probably right – but the pale Glaswegian with the dark, slicked-back hair still had plenty to offer.

It was not just that Tommy waltzed past defenders as if they were rooted to the spot; it was the stylish way he did it. He would sway one way, dipping a shoulder as if betraying his intentions, and then he was gone in the opposite direction: opponents knew what he was going to do but were powerless to stop him. Though not quick over long distances, his change of pace was so devastating that few full-backs recovered in time to prevent one of his tantalizing centres, either floated or curled, that had the purists purring at the accuracy of his left foot. Not that he lacked skill in his right, as anyone who saw his 25-yard chipped goal at home to West Ham in September 1960 would testify – but, demoralisingly, as he shone that day his Everton career had only a week to run.

In the next game, at Stamford Bridge, Tommy broke his leg in an accidental collision with Chelsea goalkeeper Reg Matthews. The break mended, eventually, but the aging Scot never returned to top-flight duty, instead leaving to make a handful of appearances for Barnsley before retiring. Many respected judges maintain that the Blues were thus deprived of their most gifted wingman since the war; and to this day, there are still those at Goodison who sigh wistfully at the mere mention of Tommy Ring.

All the latest from sports clubs across Laois LIONS AFC NEWS: New Pitch Development – Whilst Lions AFC did not…