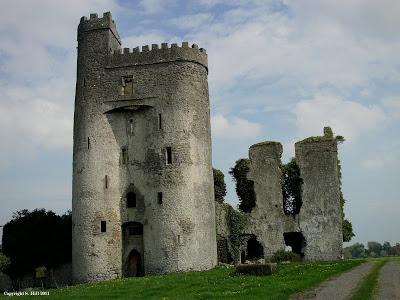 Not all Tudor ‘Planters’ in Laois were Protestants

Reproduced here with kind permission of Frank. Click here for his site.

When trying to find out what I could about the six other members of the so-called ‘seven tribes of Laois’, one thing became clear: not all of them were Protestants. Which leads to something else: I was wrong to assert that there was no inter-marrying.

Let me begin with the one that appears to be the most prominent of the six: Giles Hovenden. Originally from Kent, Giles was in Ireland from around 1532 when he seems to have resided within the Pale. In 1559 he was appointed guardian to the young Hugh O’Neil who had been placed under the protection of the Crown following the death of his father. One of Giles’s sons would later marry a daughter of Turlough O’Neil.

In 1549 he was granted the Lordship of Killaban. He was married to Elizabeth Cheevers, a member of a family long established in Ireland. Their daughter married John Barrington of Cullenagh. Possibly the first example of inter-marriage between Catholic and Protestant among this group.

In 1551 he was Commissioner for Cork, Kerry and Limerick, a time when the activities of Crown forces would contribute to the subsequent hostility of the Desmonds to the Crown.

His land holdings in Laois included Tankardstown and Ballylehane castles, not too far geographically from the Cosby land in Stradbally.

Barrington was a member of an Essex family with connections to Sir Henry Sidney, right hand man to the Lord Deputy of Ireland in the 1550s, standing in for him whenever he was absent. Sidney himself became Lord Deputy in 1565. I was able to find out a little about the family from a gentleman called Ralph Gillis, a descendent of a Barrington who migrated to North America in the nineteenth century. He very kindly sent me snapshots of family trees. The website Duchas.ie has an entry for Ballyroan which includes some information about the Barringtons of Cullenagh. Cullenagh is, of course, another location close to Stradbally

John Thomas Bowen is another family for which I have so far found very little information. He was made Constable of Ballyadams Castle in 1549. Two years later he was granted a 21 year lease on the castle. Upon his death, in 1569, he was succeeded by his son Robert, who became sheriff in 1579.

Neither Heatherington nor Ruish are names for which I can find any confirmation of their involvement in the plantation of Laois, beyond the fact of their inclusion in the the list of seven ‘tribes’ in Samuel Lewis’s 1837 Topographical Dictionary of Ireland, in the section on Queen’s County.

A Google search for Ruish tends to default to ‘Rush’. It could be a rendering of an old Irish name, O’Ruis. described as “a rare Leinster surname” in the Rev. Patrick Woulfe’s 1928 Irish Names and Surnames.

I can find no record of the the name Heatheringtonearlier than the nineteenth century when 3 are recorded as residing in Abbeyleix and one in Durrow. I can only conclude that the role of these two ‘tribes’ in the ‘plantation’ was very minor if, indeed, they had any such involvement.

Finally I come to the other name for which there is a lot of material available on line: Robert Hartpole. Like Giles Hovenden, this man was Catholic. He was married to a member of the O’Byrne clan. In the mid-1550s he was made constable of Leighlin Bridge Castle. He was granted land at Coolbanagher in 1563. As noted in a previous post, he was present at the massacre of Mullaghmast, and his daughter married Francis Cosby’s grandson (a protestant). He was at various times Constable of Carlow Castle, Sheriff of Carlow and of Laois. From 1575 he was resident at Shrule Castle which he enlarged.

He appears to have become estranged from his wife at some point. The battle of Glenmalure, at which Francis Cosby lost his life when Crown forces were ambushed by a remnant of the Desmond rebels, took place on traditional O’Byrne land.

In conclusion, this statement from Maírtín D’Alton’s article about Shrule Castle on The Standing Stone website suggests there were not seven, but 37 planter families: “The Plantation was not arranged along ethnic or sectarian lines. After the plantation was reorganised in 1563, . . . the planters were made up of; (as described by Rolf Loeber);

‘Fifty one in county Offaly and thirty seven in Leix. Half the Grantees were soldiers (five of whom came from Scotland and four from Wales). Most were Roman Catholic. About a third were new English, another third were Irish, while only 17 % of the settlers came from the English Pale’.”

If it is the case that there were 37 in Laois, the notion of ‘seven tribes’ is an understatement. I wonder who were the other 31? Given that reliable records exist for only 5 of the 7 named ‘tribes’, it seems unlikely that we will ever know. For someone pursuing the history of Stradbally it is pertinent that these five were close neighbours, each of the holdings mentioned above being within a few miles of each other and of Stradbally.