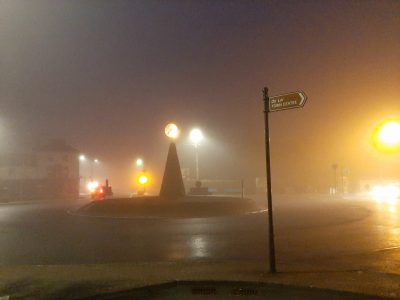 What the weather has in store for us this long weekend

— Temperatures will average 3 to 4 deg above normal, milder than normal especially during overnight hours.

— Rainfalls will gradually amount to about twice normal values in parts of the south and west, possibly also central counties, east and north may come out closer to average. Some of the heavier rainfalls will occur early Friday, mid-day to late Saturday, and Monday-Tuesday.

— Sunshine will be about half to three quarters of the normal amount.

— Very windy at times from the south to southwest.

TODAY will be mostly cloudy with a few brighter spells, and showery outbreaks of rain, with dry intervals possible at times. Mild with moderate south winds 40-60 km/hr, highs 14 to 16 C.

TONIGHT a strong frontal system will sweep across the country with outbreaks of heavy rain possibly including some thunderstorms, squally winds veering sharply towards morning from southerly 50-80 km/hr, to westerly. Lows near 12 C but temperatures may rise in some eastern counties during the overnight hours to 15-17 C. Some fast accumulations of 20-30 mm rain in the midlands and inland west could cause brief road travel disruptions, although during the late overnight so check on conditions if you have an early start Friday as the after effects of this could take a few hours to subside.

FRIDAY this front will be near the east coast during the morning rush hour clearing east before mid-day, squally winds will then abate somewhat before returning to a moderate southwest flow with any clear breaks brief and followed by overcast skies and heavy rain showers at times by late in the day especially in west Munster. Temperatures steady 12 to 15 C, winds becoming south-southwest 50-80 km/hr.

SATURDAY more heavy rain is likely at times with southeast winds and temperatures steady 10-13 C, turning a bit milder in the south as the rain pushes slowly further north. Amounts of 20-40 mm are possible with further flooding, west Munster and parts of the midlands most at risk.

MONDAY (31st) to WEDNESDAY (2nd Nov) still under watch for possible complex storm development and possibly in two waves moving through on Monday evening and Tuesday night. The details are still unclear with different guidance offering different details on intensity and track. It seems likely to be wet, windy and still rather mild (10-12 C).

The interval to follow will continue rather unsettled and somewhat cooler with temperatures closer to the seasonal averages for early November. Take note though this is probably a scenario where eventually a powerful storm could emerge as yet undetected in two or three weeks.

My brief summary for winter prospects 2022-23 would be that indications are mixed and there could be some wintry spells with cold temperatures and snowfalls, together with milder and sometimes stormy intervals. At the moment I can’t really rule out any outcome as patterns like the present one have evolved into considerably different outcomes in years past, some of them mild and stormy winters and some more variable including one or two quite cold winters. Some may recall that the weather turned quite mild for the first part of November 2010 before that cold spell hit later in the month. So I will keep watching pattern development and try to give some lead time for any large-scale changes but this unsettled Atlantic driven regime could last well into the winter with the sea surface temperatures being quite high.