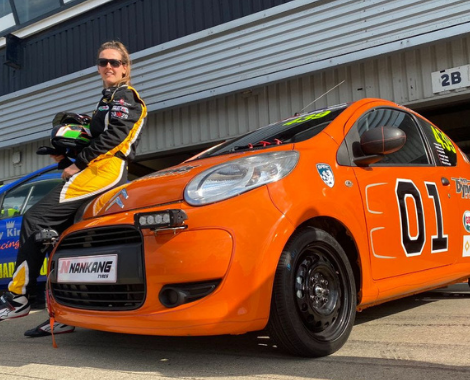 Nicole travels to Oulton Park in Cheshire later this week

Having made her 2021 debut at Silverstone last weekend, joining Team Dynamics for the 24 Hour C1 race,Nicole Drought will travel to Oulton Park in Cheshire later this week to test a TCR Touring car for the first time, ahead of a proposed return to the Britcar Endurance Championship later this month.

A three-time class winner in the Britcar series in 2020, Nicole had not raced in 2021 until Silverstone last weekend. The team had a few issues with their newly built car and the six-driver squad only managed to qualify 50th on the grid. Nicole boosted their hopes just before the race though by posting 11th fastest time in the warm up, having made a few setup changes beforehand. As fastest driver, she started the race and charged from 50th to 29th before pitting two hours later.

Unfortunately though, luck was not smiling on the team and a fuel pump failure meant a tow back to the pits and an associated three lap penalty. This, allied to some damage sustained during the night and a few other issues, dropped them down the order once again and they eventually crossed the line in 41st place.

This weekend Nicole will experience a slight increase in power, going from the 70bbp of the little Citroen C1 to almost 350bhp in the Motus One Cupra Leon TCR! The car will be a little different to the Porsche 718 she campaigned in 2020, but having previously taken wins in a Honda Integra and the C1 Challenge, she is relishing the chance to return to front wheel drive.-


Nicole Drought had this to say:

“Silverstone was great for a number of reasons. To meet and race with the Team Dynamics crew was amazing and of course, I loved being back behind the wheel again. It’s back to business this weekend though and once again, I can’t wait. Oulton Park was probably where it all clicked for me last year in terms of pace, so I’ll always be a fan of the track. Also, I’m excited at the prospect of testing a TCR car for the first time. I visited Motus One at Silverstone recently and checked out the car. I’ve been lucky enough to drive many different cars over the last few years and to jump behind the wheel of a factory built Touring Car is definitely another box ticked!”

About Nicole Drought:
Nicole Drought, 25, from Roscrea in Tipperary, is Ireland’s top female racing driver. In 2016, she became the first woman to win in the Irish Touring Car Championship, taking victory in the Production Class in her Honda Integra. She has subsequently raced in Global GT Lights, Stryker Sportscars and the Britcar Endurance Championship.  Nicole is the only Irish Ambassador for the International Sean Edwards Foundation, with whom she tested a Porsche GT3 Supercup in Le Castellet in 2016. In 2018 and 2019, Nicole raced in the Irish Stryker Championship, running at the front all year with a number of podium finishes. She is also the reigning Class 1A Endurance Trial Champion, having taken the title in 2018 and successfully defending it in 2019, with six wins from six starts. In May 2019, Nicole became the first woman to win in the UK C1 Endurance series, when she partnered Colin Lewis to victory in a 4 hour race at Anglesey in Wales.
In August 2019, Nicole drove a Formula 1 car at the Mondello Park Historic Festival, when she demonstrated the ex Derek Daly March 811 for CJJ Motorsports (above)  and in February 2020 she travelled to Palm Beach in Florida to drive the team’s Jordan 192 F1 car.

In 2020, Nicole joined the CJJ Motorsport team. The initiative, set up by Irish expat John Campion,  supported Nicole as she competes in the UK Based Britcar series. She took three wins and four podiums en route to second in the class championship.
Nicole is also an Ambassador for Formula Female, the initiative set up by Irish Hockey Star Nicci Daly to attract more females into Motorsport, Motorsport Ireland, 20×20.ie, WISP, and the International Sean Edwards Foundation.

Portlaoise Badminton Club Welcomes Beginners  As many people look towards getting fit and trying something new as January sets in,…

Latest Laois Sport: Midlands to get its own Football Centre of Excellence