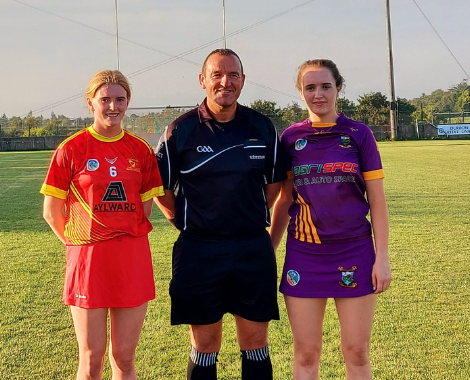 This thrilling encounter, held at the GAA Grounds in Durrow, switched over and back before Brigid’s struck for late scores to lift the trophy.

At the first water break this final looked destined to be a non-event. Brigid’s proved much too strong in the opening quarter and had built up a substantial lead of 3-04 to a paltry brace of points for The Harps. However the Durrow and Cullohill outfit roared back into the contest after the first water break. A rousing fifteen minutes from the home side saw the gap narrow down to a manageable four points at the interval. However a missed goal chance early on in the second half for the Harps saw the momentum swing back toward the Saints who held on for victory.

The speedster Aiva Coss got through for Brigid’s first goal in the opening minutes and that set the tone for a dominant opening quarter for the Rathdowney and Errill side. A second goal through a forest of hurlers soon followed while a wonderful solo and point off her left from Gemma Hoare underlined the Saints’ dominance. The Harps registered their first point from a Lisa Kirby free as the hosts struggled to get clean possession. The Harps’ next attack saw Kirby’s pass cut out and the Brigids’ counter attack, despite a marvellous Jade Bergin hook, ended with Evelyn Aylward flashing home another goal. Points from Aine Costigan and Gemma Hoare rounded off a marvellous opening quarter for the visitors.

Everything changed with the resumption of play with The Harps, now stronger over the ball, were winning possession again and again. Emily Duggan started the scoring surge with a fine point then Rachel Deegan broke through and fired home her side’s first goal. Soon after a scintillating Lisa Kirby run up the left wing set up another point from play for The Harps. The hosts now had serious momentum built up. A Jade Bergin free set up Emily Duggan and the forward duly slammed home her side’s second goal. Brigids then grabbed a goal of their own despite a wonderful initial block from Cara Henderson in the home goals. Good defending from The Harps immediately after saw the hosts launch a searing counterattack that was rounded off with Rachel Dollard swinging over a fine point. Great strength over the ball from Rachel Deegan allowed the sharp corner forward carve out the space to fire over another great point. A brace of points for The Harps soon followed with Lisa Kirby’s effort the pick of the bunch. County star Louise Creagh stopped the The Harps’ momentum when she burst through tackles out on the far sideline before angling her point over. A dogged Harps side kept motoring however and a superb Aoife Finlay block on Hoare in the heart of The Harps defence summed up the home side’s determination. The half ended fittingly with the Harps snaffling a poor Brigid’s clearance out of defence before spearing over the point.

The second half saw the scoring returns from both sides drop as the heat and the exertions of the opening period affected the players. The Harps, however, should have opened the half with a splendid goal but an incredible block from Sophie Kelly kept them out. At the other end Brigids didn’t look a gift horse in the mouth. Despite an unbelievable block from Muire Fitzpatrick Brigids somehow managed to scramble the ball over the line for a fifth green flag. Missed chances from The Harps but especially from placed balls ensured the Durrow and Cullohill combination never narrowed the deficit in any meaningful way as the final whistle loomed.

The final quarter saw a switch of free takers for The Harps but by then time was fast running out for the hosts. More bad wides from The Harps undid a lot of their great work while the Brigid’s ladies were much more ruthless from open play and placed balls. Indeed the introduction of ‘super sub’ Eimear Hassett saw the youngster bamboozle the hosts with a scoring flurry that finally finished off the challenge of The Harps. In the end St. Brigid’s deserved the win without question but the scoreline did not do justice to The Harps’ effort.

Best for the victors were Sophie Kelly and Aoife Finlay in defence while Gemma Hoare, Louise Creagh and Evelyn Aylward shone further up the park. Eimear Hassett was electrifying when introduced and will, no doubt, go on to have a great career for both club and county.

For the vanquished Muire Fitzpatrick, Jade Bergin, Rachel Dollard and Rachel Deegan along with Emily Duggan stood out.

The referee Owen Behan was outstanding. He was clear when communicating with the players and let the game flow.