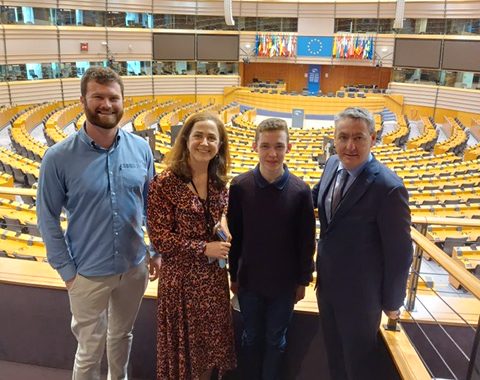 On the 29th and 30th of March, Mountrath Community School Transition Year student Luke Carroll took his place in a group of lucky participants on a trip around the European Parliament in Brussels, organised by MEP Billy Kelleher.

Luke was accompanied by organising teacher in Mountrath Community school, Mr Cillian Hegarty. ‘It was a thrilling two days to discover the rich cultural and historic Brussels City Centre, the Art Nouveau, chocolate , gastronomy, the Belgian Monarchy, the Grand Place and dining on the decadent waffles,  political system and especially the relations between the European Union and Brussels’, said Cillian Hegarty.

Mr Cillian Hegarty said that it was brilliant to see how inspired the students were meeting politicians such as the president Ms Ursula Metsula and Mr Kelleher.

Luke added that trip had left a lasting impression on him, and the rest of the Irish contingent, and to understand how the European Union parliament is a vibrant heart of democracy, where debate, conversation and progress happens for Europe.