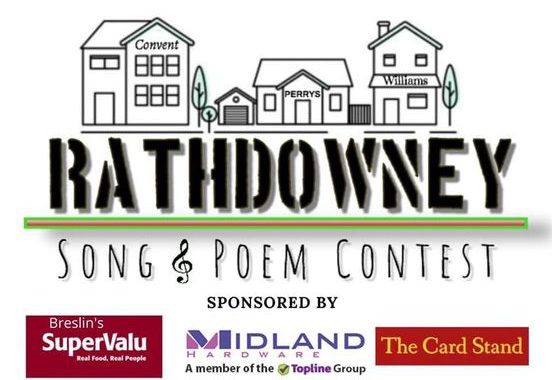 The 2021 Rathdowney Song & Poem Contest is entering into its second year. Entries are now open for this years contest and it’s very exciting to announce just some of the new judges in the form of Johnny McEvoy and Dr. Arthur Broomfield, along with contest founders, The Finns.

The contest supports creative minds through the arts of songwriting and poetry which in turn will celebrate the local tales and stories of Rathdowney and its surrounds, whilst competing for over €600 in cash prizes. In its first year in 2020 saw an amazing amount of songs and poems entered and it was stunning to see all the talented writers in the area emerging and even some international writers getting involved too. The standard was very, very high and the each poem or song was praised and lauded on social media as each entry was posted up on the Rathdowney Song & Poem Facebook page after it ended. It was a huge success and a feel good project.

The contest has a few new judges this year and are very proud to announce that Irish folk music legend Johnny McEvoy will be added to the judging panel for songs and Laois poet and short story writer Dr Arthur Broomfield to be added to judging panel for the poems along with local historian Jack McDonald. We’re delighted to welcome them to accompany the rest of the panel from last year, Blues & Roots radio DJ/producer/musician David Dee Moore, the fantastic local music teacher in Rathdowney’s St. Fergal’s College, Vicky Murphy, and local folk group duo, The Finns.

New judges Johnny McEvoy and Dr. Arthur Broomfield along with The Finns

Sponsored generously by local Rathdowney businesses, Breslin’s SuperValu, Midland Hardware, and The Card Stand, the Rathdowney Song & Poem Contest is open for anybody who has an interest in songwriting or poetry, you don’t need to be from the area, and we invite anyone who enjoys some creative writing to enter and enjoy the experience, and who knows your entry may end up being published in a book like last year or on a compilation CD at the end of the year. It’s free, and you can enter as many times as you like, as long as it’s in any way related to the Rathdowney area.

Send entries to rathdowneysongandpoem@gmail.com
More details and guidelines on the Facebook Page here.